Things you didn't know about me

I've been tagged by Justin Hinchcliffe who has a very good blog here, to tell you five things you didn't know about me. So here goes: 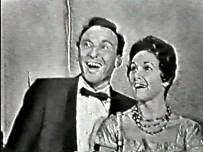 I have a very large collection of videos and DVDs of the Eurovision Song Contest, so much so that a few years ago Pearl Carr and Teddy Johnson (If you're under 60 you'll have no idea who I'm talking about) got in touch to ask me for a copy of the video of the 1959 Contest. They had of course performed 'Sing Little Birdie' live that night and, in the days before video, had never seen themselves. I was very happy to oblige.

When I was 9 I had a guinea pig called Skippy, you guessed it, I really wanted a bush kangaroo.

When I was 4 I appeared for a week on 'Romper Room' which was a childrens TV show on Anglia TV hosted by Miss Rosalyn.
I'm horribly claustrophobic: I'd rather climb stairs than take a lift, I avoid the tube if possible and my idea of hell is a windowless room with the door closed (I'd never last as a prisoner). I also have a dreadful phobia of rodents, particularly rats... shudder!
I now have to 'tag' other people to do the same thing apparently, so it's over to you Will, Richard and Jeremy.