The Daily Echo carried this aritcle on its front page today, highlighting concerns raised by the owner of Bistro on the Beach, Sheila Ryan, about the amount of shingle there. The picture on the left is one of those carried in the paper.
The Council issued this release and these pictures late this afternoon:
"Bournemouth’s seven miles of golden sands will continue to be just that, despite numerous misleading and inaccurate claims over recent days. The beach replenishment programme currently underway is a routine and normal process to preserve our famous sandy beaches for the future. The programme is not designed to replace sand with shingle nor is it doing so. Whilst some patches of shingle can particularly be found at the far eastern end of Bournemouth, at Southbourne, this is not a permanent fixture. 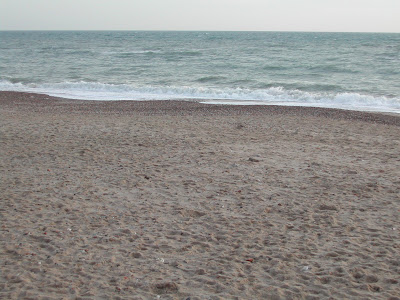 Every year, the prevailing winds attack this most exposed part of our beach, blowing away the sand. The replenishment programme will counter the eroding effects of the winter weather by topping up the beach with more hard-wearing material than sand now, and, when the worst of the weather has passed, adding a top covering of fine, golden sands and restoring the beach to its former splendour. The remaining stretches of beach are currently having even more fine sand added ensuring the beaches will be ready as usual for the 2007 season.
Chief Executive Pam Donnellan said, “This really is a sandstorm in a teacup. Our stunning beaches are Bournemouth’s biggest asset and it is just madness to suggest that we would do anything other than preserve and protect them. This programme is designed to do just that – boost our beaches in time for summer use by our residents and visitors, and I myself am looking forward to enjoying them too!” 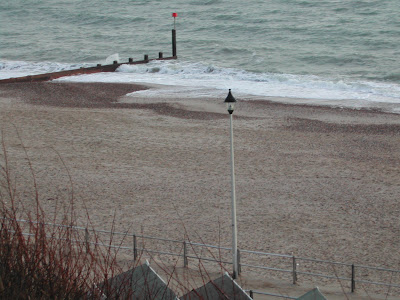 I have to admit to not having been down to the beach for a couple of weeks, although I did see the shingle there over the Christmas holidays.
There are a couple of points here I think. I know Sheila Ryan and respect her enormously for the business she has created at Bistro on the Beach. Sheila is not the kind of person to exaggerate a problem, nor is she the kind of person who would complain about the state of the beach without knowing that reporting there to be a problem with the shingle may create a self fulfilling prophecy in turning people away. Things must be bad for Sheila to be raising this issue.
Similarly Roger Brown, the Head of Leisure Services is under huge cost pressures because of the overspend in the Council. Telling the Echo that he doesn't know where the money is coming from to complete the job might not have been the best quote in terms of attracting visitors, however it does seem to me to be a veiled plea for help.
Our beaches are what make Bournemouth unique, we need to make restoring the sand a priority now, before the season gets under way.
Much more importantly we need to bring some financial control to those areas of the Council that are overspending. My ward colleague Cllr Fudge had another rambling letter in the Echo today about the council's overspent budget and our pledge to introduce green waste recycling. He is after all the chap in charge of the money, perhaps rather than worrying about what we're promising he should be looking more carefully at what certain departments of the Council are spending and why they can not keep within their budgets.
Posted by Nick King at 10:43 pm