No takers for chips in bins

ConservativeHome.com are reporting that no councils have signed up to Labour's proposed trials of the 'bin tax'.
This would be exactly the kind of scheme that the 'chips in bins' were designed for. I've been opposing the use of this technology and the proposals for this kind of taxation since I was first elected to Bournemouth Council back in 2005.
The removal of refuse from the home is one of the fundamental services provided by local councils. It's one of the services that's been consistently provided by local authorities and it is exactly for this kind of service that local taxation (be it rates, community charge or council tax) has been paid by residents.
If your council doesn't take away your rubbish as part of your local tax, then why have a local tax in the first place?
Good on those councils who have refused to join in the scheme. Let's hope the refusal of local authorities to cooperate with the Government over this will kill the idea for good.
Posted by Nick King at 8:08 pm No comments:

Apparently the Wednesday edition of the Daily Echo sold out. This is largely due to the fact that Richard Carr was on the front page of the paper here.
There appears to be a good deal of schadenfreude around Bournemouth and Poole at this news.
I don't share in it. I know from bitter experience how hard anyone in business for themselves has to work in economic times like these. I also know how difficult the decision to take the company in to administration must have been for its directors.
I disagree with Richard Carr about very many things. That's no reason to revel in his troubles, as some are doing. He faces a difficult enough few months ahead attempting to keep his businesses afloat in such uncertain times. As do we all. He deserves our respect for creating a profitable business and our sympathy now that it has run in to problems.
I wish him and all his staff all the best. Let's hope there is a way out of this situation for them.
Posted by Nick King at 10:51 pm 1 comment:

Thank you to all of you who were in touch yesterday to warn of the Travellers who had arrived in King’s Park and next to the doctor’s surgery in .  My apologies for not getting back to everyone, however as you can imagine we were active in doing what we could to stop the situation escalating and ensure that we began to move them on as soon as possible.

To give you a full update on what has happened to date:

A group of 7 traveller caravans arrived in  early yesterday afternoon. Before they had been reported to us, they had already gained access to the lower part of the Park and had began setting up in the middle of the old railway track on the all-weather pitch. Upon inspection it appears that they somehow ‘dug’ their way through the earth bunding.

Parks Officers reacted quickly to closing the  gates and soon learned another group of around 6 had driven on to the open space on the corner off  and . The second group were meaning to join the main group on  and suggestions of bribes and veiled threats were used during the next 3-4 hours to attempt to gain entry. At this point the Police were called. The other group of travellers from Harewood Crescent then appeared at the top of Littledown Avenue and a van approached the gates from inside the Park – this is a manoeuvre used to require an Officer to open the gates to allow the exiting vehicle to leave, and at this point the incoming travellers would attempt to force entry – however a PCSO arrived on the scene and the 6 caravans went back up Littledown Avenue. I and my colleagues split in order to cover all three gates into the Park.

We were then advised (at around 7:30pm) that these remaining travellers had gained entry to  and had met up with the other group. The point of entry was found adjacent to the play park opposite the Nursery at the Clarence Park Road end, a traveller was seen chain-sawing a knee-rail post at ground level and removing a section large enough to drive the remaining vehicles through. The Police asked people in the Park if they could identify the man and although it was clear it was one of the travellers, I do not believe (at time of writing) that the Police have sufficient evidence to take any action against the individual.

My apologies for the amount of detail but it is just to show that every reasonable step was taken to prevent this incursion from growing.

From a first look, it appears that this is the same group that occupied the same area last year (August 2007). This group generally frequent the area to stay locally for the Steam Fair at the end of August. As these were working travellers there was a lot of garden and other waste left behind, unlike the other recent group on the East Overcliff. Because of the behaviour of some of this group and the damage that was caused in order to get on to the space, this may be reflected in the speed we can reclaim the land, however the minimum is usually within 7-10 days.

Our parks officers will be carrying out the initial needs assessment later today with a Police Officer and our lawyers will be briefed on Monday in order to start the legal process.

I’m very grateful to Brian Heppenstall from the King’s Park team who has provided much of the detail for this information.

You may be aware that Jane has already arranged for wooden stakes to be placed around the green space in  to stop incursions in the future, to be paid for from our ward fund.  We will be pressing the Council to put these in place as a matter of urgency next week to ensure that once moved from the park the travellers can’t move there.

I’ll of course keep you up to date with any further developments. 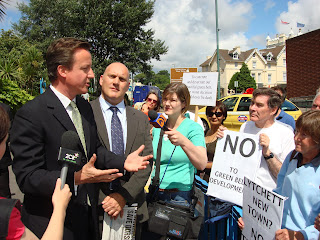 David Cameron was in Bournemouth today, to speak at the Local Government Association Conference at the BIC.

I had to pick him up from Bournemouth Airport and take him to the conference centre. I therefore managed to get 20 minutes with him to talk to him about how important the Regional Spatial Strategy is to our area. He was horrified to hear about the proposals from the Examination in Public which would result in enormous incursions on to the Green Belt in East Dorset, Purbeck and Bournemouth.

He agreed entirely with our campaign to ensure that local people, through their local councils decide where, how many, of what type and for whom this housing should take place. He also agreed to confirm that a Conservative Government would overturn these plans if we were elected in time to stop the planning permissions being granted. 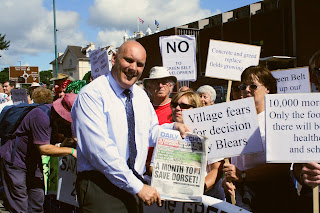 When we reached the BIC demonstrators from Lytchett Minster and Lytchett Matravers were already outside the building. I had a chance to talk to them while David Cameron went in to do his speech. It was great to see both Conservative and Liberal Democrat Councillors from Purbeck and the County Councils there demonstrating side by side. They were joined after a little while by people from Bournemouth, Christchurch and East Dorset.

David gave an interview to the Daily Echo, which I understand is going to be front page news tomorrow. He confirmed our position over the RSS in the interview. Good for him.

More importantly he also took a few minutes to meet and speak with the demonstrators outside. Again he emphasised the party's opposition and told the demonstration that if we're elected in time we would over turn the plans. He also confirmed that a Conservative Government would do away with all regional bodies, handing responsibility back to local councils to decide what kind of development should take place in their own areas.
Posted by Nick King at 8:32 pm No comments: