A fresh planning application has been made for housing adjacent to the AFC Bournemouth Stadium.
As with the application last year the plan is to demolish a family home in Thistlebarrow Road to provide an access road to the site.  Speaking to local people their feelings haven't changed.  There is little concern about the housing development.  There is enormous concern at the additional traffic and light and noise disturbance caused by demolishing the house and creating an entrance to the development at that point.
For these reasons we'll be helping local people oppose the application and will be circulating our normal letters in the next few days.
Posted by Nick King at 6:04 pm 1 comment: 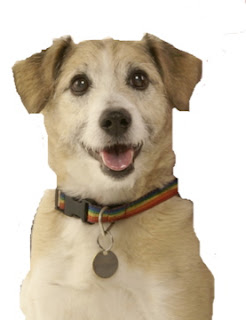 My dog Harry died this morning.  He was nearly 17 and if he had lived until the end of the week then we would have been together for 16 years.
I couldn't have had a more faithful and loving friend during that time.  I don't mind admitting that I'm heartbroken.
Harry came from Battersea Dog's Home, where he had been re-homed three times before we rescued him on a sunny Friday afternoon in 1992.  He was full of character and life; mischievous, obedient and stubborn in equal parts.
He became known throughout Littledown and Iford as he was the mascot in 2005 of the campaign to oppose the green belt development proposed there, appearing on posters in people's windows across the ward.
I loved him very much, and I'll miss him terribly.
Posted by Nick King at 7:34 pm 3 comments:

We heard today that the appeal made by the developers against the council's refusal of planning permission for flats at 1300 Christchurch Road has been refused.  This is great news and means that the applications for flats on this site have all failed.
The Council have approved an application by the same developer for conversion of the house in to two units and for two semi detached houses to be built in the garden facing on to Colemore Road.  This is a sensible use of the site in my opinion, providing adequate on site parking and in keeping with the area.  Let's hope that the developers are able to proceed with these plans quickly and that they are able to sell the homes once they have been built!
Posted by Nick King at 10:44 pm No comments:

AFC Bournemouth - A question of fairness?

Rotherham football club will start the new season with a 17 point deficit as a consequence of their not coming out of administration in a proper manner.

Apparently the same threat hangs over AFC Bournemouth and the fate of the club will be decided by the Football League today.

Deducting points from the club would seem to me to be completely retrograde. They were already relegated last season and if the club is to have any chance of survival, let alone thriving, then success on the pitch is an, if not the, essential component.

Making the team start with a points deficit from which they will find it difficult if not impossible to recover doesn't seem fair to me. More importantly it seems terribly unfair for the players and the fans. They shouldn't be penalised for problems in the boardroom.
Posted by Nick King at 7:47 am No comments: