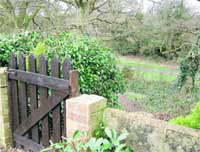 You may have seen this article in yesterday's Echo. The Council have sent out 300 letters to residents who have gates that lead on to land owned by the Council and controlled by the Leisure Department. There are a further 300 letters to be sent out.

In the letters residents are being asked to pay £50 for an access agreement which will last for five years, thus ensuring that the Council does nothing on its side of the access to block it (like planting a shrub or erecting a fence.

I understand that most residents have refused to pay this amount as yet. The argument against there being a need to put such an agreement in place is that in the vast majority of cases the access has been in place for more than 20 years and therefore should be considered an established right of way.

The Council's initial response was that established rights did not apply in cases where access was on to a public right of way.

I've just received a note from the Council to say that they are having second thoughts and are checking out the situation with their legal department.

If you've received a letter you should be receiving a second one explaining the situation and telling you that you need take no action until the Council contact you again.

We're left with a situation where residents are upset, a second set of letters is having to be sent, money has been wasted and no one is happy. Most of all, let's see if someone takes political responsibility for this. I somehow doubt that they will.
Posted by Nick King at 6:01 pm