No Party Conference in Bournemouth? 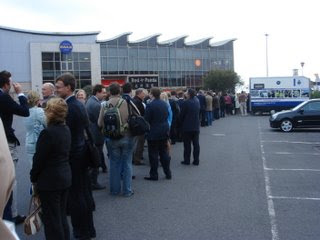 The Sunday Times' Atticus column is reporting here that Party Chairman, Francis Maude, has decided not to bring the 2008 party conference back to Bournemouth as a result of the problems over delegates passes at this year's conference.

If you remember many delegates had to queue at the Pavilion for hours to obtain their passes after Dorset Police had been unable to process them for security clearance prior to the opening of the conference. I was lucky, my pass arrived in plenty of time (and then I spent all my time at St Mary's church), however the Mayor and Mayoress were amongst those waiting until the last minute for clearance and Hannah Ellwood's (our MP, Tobias' wife) never turned up at all.
The full details of Mr Maude's anger and frustration at the fiasco are set out in an eleven page letter to the Chief Constable, Martin Baker.
I have a copy of the letter and it certainly raises a large number of questions that Mr Baker needs to answer. It does not, however, say that the party will not return to Bournemouth next year, it does say that the venue of the conference is under review. Mr Baker therefore needs to answer Mr Maude's concerns very quickly indeed and provide some assurances of the utmost police cooperation to ensure that this year's confusion and delay are not repeated.
I know that the Mayor and our members of the Police Authority are also doing all they can to ensure the party's concerns are assuaged.
If the report of no return to Bournemouth is true it would be a huge blow to the town. We all need to be lobbying to ensure that Atticus' prediction doesn't come about.
(With apologies to James Cleverly for stealing his photo of the queue for conference passes)
Posted by Nick King at 1:32 pm

You’re welcome to use this or any other pic from the blog Nick.

I like Bournemouth as a venue and my Brother-in-law lives there so I don't have to pay for accommodation. As you can guess, I am keen for whatever problems need sorting to be sorted and for us to continue using Bournemouth.

Let's hope we can get it sorted out pronto, the loss of the conference would be a huge blow to the town.

The ramifications would spread well beyond the loss of the direct business. Having invested so much money in the refurbishment of the BIC it's vital we retain people's confidence in our ability to manage a conference of this size.

I am not sorry.It causes so much disruption to local workers and puts extra pressure on a police force already stretched.Have it in London.