Under age means under age. Doesn't it? 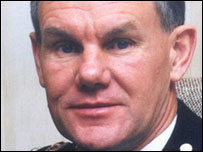 I don't normally comment on national issues on this blog, I try and keep it local as you probably know, however I just noticed this story on the BBC website, which made me do a double take.

Chief Constable Terry Grange of Dyfed - Powys police has suggested that sex between young men aged 16 - 20 and young girls under 16 may not necessarily be paedophelia, rather it's a 'grey area'.
How on earth can a Chief Constable be suggesting that sex between an older boy/man and a girl who is under age is any way acceptable?
If a young person is under age, then they are under age. Suggestion that a young man as old as 20 may not necessarily be doing something wrong by having sex with a girl under 16 seems to be opening a can of worms to me.
To my mind young people become sexually active way to early anyway. Talk like this only suggests that it may be OK for this kind of thing to happen. I can't see any circumstance where it is. I hope Chief Constable Grange withdraws his comments post haste.
Posted by Nick King at 12:59 pm