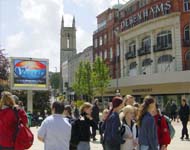 There was a special meeting of Bournemouth Borough Council last night to discuss a proposal to promote an Act of Parliament which will place control of street trading anywhere in the borough with the council.

I've been campaigning for some time for some control to be placed on the pedlars in Bournemouth Square who sell goods from the moveable barrows. Normally these are cheap clothing accessories, mobile phone accessories or fake sunglasses and the like. The Council are unable to police them at the moment because they are able to obtain a licence from the police, for something like £1.25, which places them as a pedlar in the eyes of the law. This means that as long as they keep moving their barrow every hour or so, even if that movement is only a few feet, they can go essentially wherever they like in the town centre.
The consequence is that on busy Saturdays in the Summer and around Christmas you can end up with anything up to a dozen of them cluttering Bournemouth Square.
I'm very pleased to say that the motion to pursue the Act of Parliament was approved unanimously. This means that hopefully the Act should be given Royal Assent by the Summer of 2007, allowing the council to police this issue from July or August onwards.
Posted by Nick King at 7:49 am

It's long overdue and has cost my business a small fortune, why did it take so long? Having opened a shop 6 months ago in Bournemouth high street I had predicted good things, untill I found a street trader in direct competition who was illegally seeling goods. Having been sent in circles by the police and the council I had almost given up. Why should I pay £914 per month in rates when there is a street trader paying next to nothing standing right outside. I have reported to the council that he is illegally selling goods (he is only allowed to provide a service) and they keep saying that trading standards will come down at some point. Am I going to get a rebate on the rates I have been wasting? No. It's about time the council earnt their rates and realsied how hard it can be for a new business to get off the ground. As soon as they know he is breaking the law they should be acting not passing the buck. I would no longer recomend Bournemouth as a place to invest in business, at least until something changes.