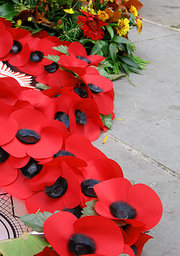 I attended the Rememberance Sunday service at Bournemouth's Cenotaph in the Central Gardens this morning. It was a moving and poignant event, recognising the enormous and often ultimate sacrifice given by our servicemen and women for their country.
It was heartwarming to see so many people there, the park itself was full as were the railings overlooking the gardens along Bourne Avenue and Avenue Road.
All the more disappointing then that on my reckoning only 35 of 54 councillors were in attendance. I'm sorry to say that I was the only representative from Littledown and Iford. I don't know where our Lib Dem colleagues were, I hope they were simply paying their respects elsewhere.
It was just heartening to see Margaret Rose, one of my predecessors as Conservative councillor for our ward on the dais with me however. Margaret continues to do much for our community and I was proud that there was at least someone else from Littledown and Iford there to pay our respects.
Posted by Nick King at 8:52 pm

Cllr King thankyou for your comments about Margaret Rose.In the time i knew her she was a considerate,caring councillor who is missed greatly.I hope she returns to the political arena