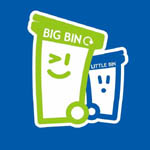 I'm afraid I spent yesterday back on the media treadmill about bins.

This time it's as a result of the new system for checking that residents are putting the correct items in their recycling bins.
What will now be happening is that the refuse collectors will be opening and checking the contents of your 'big' recycling bin. If they note any items in the bin that are not recyclable then they won't be emptying it. Instead a sticker will be placed on it telling you that there are items in it that are not recyclable and telling you to ring a council number.
The idea is that you then call this number to be told what it was that shouldn't have been in the bin, offered 'help' with your recycling and then to arrange for someone to come back to empty the bin once you have removed the offending item. If you haven't I assume they still won't take the bin away.
I understand why there has to be a system to check that the right items are placed in the recycling bins. If there is too much 'contamination' in the bins when they arrive at the recycling plant then the loads are rejected and the council has to pay for the whole load to be sent to landfill.
However, again the introduction of the scheme seems to me to have some substantial flaws:


Surely a better system would be to simply have a the waste people remove the offending article, put it in the little bin and take the waste. The refuse collector could then place a note through the door of the house it came from informing the residents they had made a mistake and asking them not to repeat it. If they did, after a number of weeks, then this system of not taking the waste could perhaps be used.
Posted by Nick King at 7:44 am

since re-cycling has been introduced,it seem that it has encouraged the amount of wheelie bins left for weeks on end has increased.Can we get some action PLEASE!

You're absolutely right! The council's policy of not collecting rubbish from bins that are over flowing or have non recyclable items in them (in the case of the large bins) has resulted in many being left standing for far too long.

This policy is all well and good where the owners of the properties involved either understand or are prepared to cooperate with the system. Where they are not it's causing a real and extremely unpleasant problem.

If you can identify for me where the problem you have noticed is, I can attempt to get it sorted out for you.

Let's also hope for the right result next May when a more realistic and cooperative approach can be introduced.

the increase this has put on my water bill having to clean out tins and bottles is quite a shock.And the amount of wheelie bins leftt on the pavement by residents has increased making the area downgraded