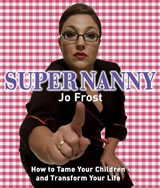 The Government is apparently going to announce this morning that they are going to set up a network of 'Super Nannies' to assist parents with unruly children in the 70 most deprived areas of the country.

No, they're not going to be clones of the wonderful Jo Frost (see photo). Rather, child psychologists to whom parents and children will be 'referred'.
I can't think of anything more patronising than this idea. I heard an interview this morning with a spokesman from the NCH (National Childrens Homes) who said quite rightly that you can not force parenting skills on people.
A few months ago I spent the afternoon with two of my Labour council colleagues, Ted Taylor and Beryl Baxter, touring their ward, Kinson North. An area more different to Littledown and Iford you could not find in Bournemouth.
They took me to a number of fantastic community initiatives, not least amongst which was the Sure Start centre in West Howe. There, in a centre run in part by the community, parents are encouraged to engage with their children and, slowly, are introduced to parenting skills if needed. They aren't referred there, rather go along because they know it to be a useful source of help when they are having problems and because the rest of the community is so visibly supportive of it.
Surely the Government's investment should be in more of this kind of centre rather than employing psychologists to whom parents are forced to go.
Super Nannies? Just another symptom of our Nanny State.
Posted by Nick King at 6:58 am