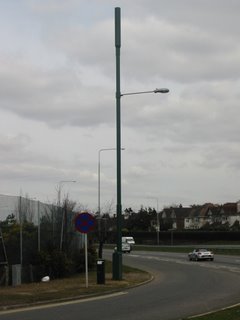 I've recieved this update, from the planning department, on the situation concerning the mobile telephone mast on the Wessex Way, by the Queen's Park Health Club and opposite Littledown Drive and Thistlebarrow Road.

"I write to advise you that a meeting between representatives of 02, their agent's and Officers took place yesterday to discuss the mast that has been erected at Queens Park South Drive.

The representative of 02 expressed the company's willingness to negotiate with the Council with regard to the possibility of relocating the mast from its current position and to discuss mast sharing with Vodafone. It was pointed out that if a mast share was agreed between the two companies that resultant structure would be far bulkier and higher than the monopole that currently exists. It was stated that the mast has yet to be switched on and an undertaking was given for the mast to remain off whilst negotiations are taking place.

02 and their agents will be looking at alternative locations in the near vicinity of the existing mast, considering improving the current site by painting the mast grey to match adjoining lamp columns and carrying out landscaping and talking to Vodafone about sharing a mast. 02 have undertaken to provide the Council with details of their proposals within the next few weeks."

To remind you, O2 put the mast up after receiving a letter from the Council refusing planning permission, which they contest was sent a day too late.
Posted by Nick King at 9:13 am