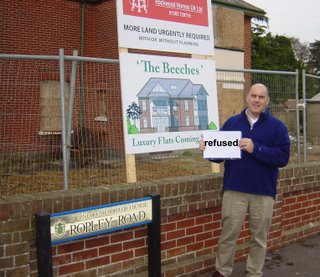 I have had some feedback as a result of the earlier e-mail which I thought I should share and have also been told some other good news today.

As a councillor now I am not allowed to object to a planning application formally until it gets in front of the planning board. For this reason I wasn’t aware that the revised planning application had been refused already by the planning department. My thanks to the residents of Ropley Rd who e-mailed me to tell me this. Apparently those who sent stamped and addressed envelopes with their objection letters will have heard already that this is the case.

I’m very sorry for not being more on the ball.

I should have also mentioned in my earlier e-mail the concern that there is a large amount of rubbish being dumped on the site. This has been brought to my attention and I have spoken already to the planning department about it. They visited the site last Monday (May 8th) and sent me the following update after their visit:

“A period of 21 days has been given for the items to be removed. If no action is taken after that period of time, we will consider whether to issue a Section 215 (untidy site) Notice. Failure to comply could result in a prosecution being taken against the owner through the courts”

This means that we should be looking at action being taken two weeks on Tuesday (Monday being the bank holiday) if the site is not cleared. I understand further rubbish has been dumped there this week and therefore I will be speaking to the council officers concerned on Monday morning to ensure that they are going to take action once the time limit is up if the rubbish is not cleared.

I had a meeting with a highways officer yesterday to discuss some issues on Castle Lane East. He mentioned some plans to me then that I have been able to confirm today.

Since I was elected in December I have been pushing for new signage on Castle Lane East as you head towards Iford so that it is clearer that the right hand lane can only turn in to Holdenhurst Avenue. I have also been asking for a review of the road markings heading towards the Cooper Dean roundabout, particularly through the traffic lights, as the current layout to my mind only adds to the chaos there.

I’ve had confirmation today that reviews of both are being undertaken and that the highways department accept that both need to be reviewed and reformed. We can therefore anticipate some action before the autumn on both counts!


Thanks for reading this further update
Posted by Nick King at 10:45 pm