UKIP and the BNP 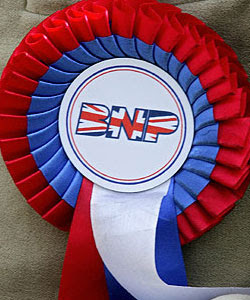 The BNP web site has this comment at the begining of an article about the number of UKIP candidates standing in this year's local elections:
"British National Party activists and members in all parts of Britain are generally on good terms with local members and activists of the UKIP – having so much politically in common."
That says it all really. It certainly confirms the suspiscion I've long held that UKIP are just the more acceptable alternative for those who would otherwise be more at home in the BNP.
Posted by Nick King at 9:25 am

It is becoming a fact in Bournemouth that there is an under-lying tension and resentment toward immigrants within the town.Sad,But true.So much so,that in years to come the BNP,Could become a party in which could have votes and credibilty.Its all very well politicans talking about social intergration and harmony but beyond the surface it is far from that.Racsim is not only in the white community,there is also an Asian BNP.Many people waiting to be housed by the Council Waiting list blame the immigrants for taking their place.Dissillusioned with main stream party politics, i feel that a wise politician would be wise to look over their shoulders as the BNP has a growing following

Having just moved down from the North West i must say what a lovely town Bournemouth is.However,where i came from the BNP gathered massive support from a general range of people who were tired of the main political parties and immigration.It seemed that we were the minority and the ethinic groups became over-sensitive on certain issues.The BNP says what people think and if immigration increases to disturb the social balance they could become a force,even in a town like Bournemouth.

I once went to a BNP Meeting in Bournemouth and i was quite surprised at the sense that they talked.Even though i would not vote for them now,i cannot rule out a future vote.There is a place for them in British politics.

Maybe if the tory party put Britain first you wouldn't find the electorate having to find people who support the same views as themself. Considering the millions who voted UKIP and BNP in the euro 2004 elections it is a growing breed of people who want these views supported. not vote blue get more browns.