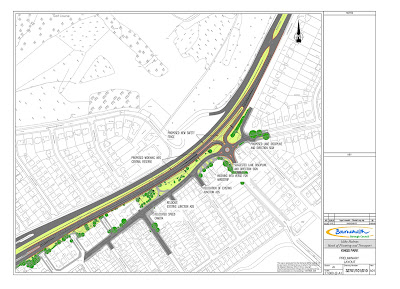 If you live in Old Littledown, New Littledown or at the upper end of Harewood Avenue you will have received a request for feedback from us about the proposed on slip at King’s Park Drive. I think this is essential if we are going to properly handle the congestion problems at the top end of Littledown Avenue and along Holdenhurst Road.

Apparently the highways department are not recommending that the slip road goes ahead. They are saying they don’t think there is enough room for it and they think that it will create more traffic on Ashley Road and through King’s Park.

To me that’s simply unacceptable. They were able to recommend it two years ago, so why not now? As to more traffic through Ashley Road and King’s Park, there’s a simple answer to that: make the Holdenhurst Road bus lane part time so that it both lanes can be used at peak periods, thus allowing freer flow of traffic along Holdenhurst Road negating the need for people to turn right at the lights at the end of Ashley Road.

The Highways Department are proposing some improvements to the Ashley Road and Richmond Park Road junctions. Their consideration is apparently that this is the best that can be done to improve traffic along that route. I really think they should be thinking again!
Posted by Nick King at 11:36 pm

At last some action.The slip-road is needed to deal with the congestion and football traffic.The idea of a part time bus lane is a good idea and would resolve the issue at Ashley Road lights.It is beyond me why the council engineers have reservations

The Bus lane in Holderness Road is a waste of time and just fuels further congestion.

There is always a tailback in the mornings in Littledown Avenue and across the Kings Park roundabout. This together with the tailback in Ashley Road trying to turn into Holdenhurst Road means that the Buses are stuck in the traffic way before they reach the short bus lane. Why are that stuck. Because cars are all filtered down to one lane before the bus lane starts. Do away with the bus lane so that cars can clear the Ashley Road junction and the tail back will go. The time saved by a bus not having a long queue in either Ashley Road or Littledown Ave will more than balance the loss of such a short bus lane.

This together with the construction of an on slip at Kings Park roundabout, will clear all traffic queues at a stroke, much to the benefit of local homes and the environment. It will also be of great benefit to Kings Park in clearing traffic on match days and other events.

A slip road to Kings Park is required.At this time of year,Kings Park becomes a busy place with all kind of events.Also even though it will never happen i would like to see Kings Park open in the summmer months to accomodate events like Funderworld.Kelly and Family