Swimming this morning for charity 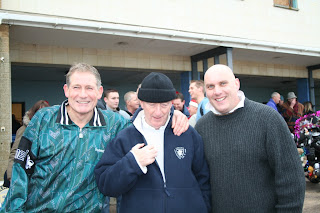 This morning I joined the Bournemouth Spartans for their Christmas Morning swim off Boscombe Beach in Bournemouth. In the photo above I'm joined by Cllr David Smith from Central Ward in Bournemouth and by the Mayor of Bournemouth, Cllr Bob Chapman.
We all joined the swimmers and in the process we raised over £1,000 for the Mayor of Bournemouth's Charity Appeal. It was actually very invigorating, if extremely cold! I'd do it again though, particularly if I can ensure we raise that kind of money for local charities each year.
Anyway, for those doubters amongst my sponsors I need to post evidence of actually having been in the water, so here it is:
Warning!
Before you scroll down to the next photo I should warn you it shows me in a partially unclothed state. It's not pretty. I'm definitely starting that exercise regime in the New Year! 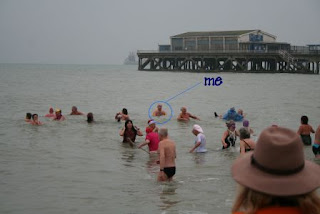 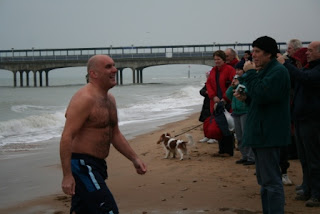 Cllr King--You ate all the pies!

~blushes~ Yes I did. They were all mince ones and they were only eaten in the line of duty... but they were yummy!